Why Should I Floss, Isn’t Brushing Enough?

Why Should I Floss, Isn’t Brushing Enough?

Most people are well aware that practicing good oral hygiene can lead to better oral health.  And most are just as aware that brushing twice per day and flossing at least once per day are two of the best things they can do in that regard.  However, what people know and what they do are not always in agreement.  And this is evidenced in an article published by U.S. News and World Report.  According to the article, only 30 percent of people in the U.S. reported flossing their teeth daily.  Meanwhile, 37 percent of Americans said they flossed less than daily.  Rounding things out, a little over 32 percent of respondents said they did not floss at all. 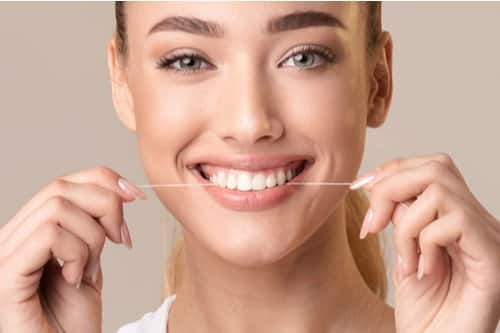 Dentists with La Costa Dental and many other dentists in San Diego collectively agree that flossing should go hand-in-hand with brushing. After all, regular flossing helps keep cavities, decay, and gum disease at bay and can even reduce an individual’s chances of developing heart disease, diabetes, stroke, rheumatoid arthritis, and certain cancers. And this is because flossing removes bacteria while simultaneously helping to resolve or prevent infection and inflammation within the oral cavity. Even with this knowledge, more than a third of people in the U.S. are still choosing to either forgo flossing every day or skipping out on it entirely. According to the American Dental Association, and further backed by many dentists in La Jolla, some of the more common reasons people cited for flossing less than daily or not at all include the following:

Contrary to popular belief, brushing twice per day is not enough to protect our teeth from harmful bacteria. And it is certainly not enough to fend off the more than 500 different species of plaque that want nothing more than to stick to our teeth and cause cavities. Although brushing twice per day can remove such pathogens from the surface of our teeth, there is no toothbrush on the market capable of thoroughly removing them from the tiny spaces in between our teeth. The longer plaque, bacteria, and food debris remain trapped in-between teeth, the more likely it is that dental and physical health problems are to follow. So even if you find flossing too time-consuming, painful, grotesque, or flat-out unnecessary, doing so is one of the best ways to go about safeguarding your oral and physical health. By the way, this assertion is one that dentists in San Diego, dentists in La Jolla, and dentists throughout California and across America all share.

For those not aware, human beings have an average of 25 microns to about 125 microns of space in-between each of their teeth. That said, daily flossing is the only proven way to effectively remove food particles, plaque, and other bacteria that routinely accumulate in those tiny crevices. With that in mind, if you’re not already flossing every day, consider this article a clarion call to start doing so today.

How the Best Dentist in San Diego Will Save Your Teeth